Sometimes I’ve wondered why I write almost continually about the news but almost never watch it on television. Today, I saw the answer with great clarity.

Reading, I saw that the Senate was voting on the shutdown and decided this was one of those real-time events that I’d watch live. It wasn’t really too lively. I immediately saw the vote tally on CSPAN-2, but instead of turning it off, I switched to one of the cable news shows to see what they were saying. I won’t name the channel or the 2 women whose looks I’m going to talk about, but I was immediately saying: “Oh! X didn’t have time to go through hair and makeup! You can see how she really looks. That’s so weird.” Etc.

The vote came up suddenly enough, it seemed that X had not undergone the full processing that normally forms her into the being I’m accustomed to seeing on camera. She looked like an ordinary woman, yet being on TV, she looked completely bizarre. Her hair was lank, her face red and ill-defined. And yet, she looked like the women I see on the street in my walking-around life.

Later, there was a panel discussion that included a woman, Y, who had, I think, gone through full processing and attained what I theorized was the post-#MeToo look for women. She wore a fully covered-up black get-up, something like what Frances McDormand wore at the Golden Globes… 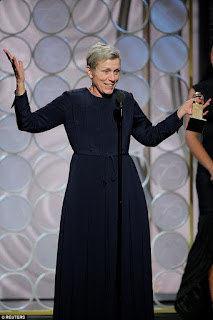 … and she had very long, parted-on-one-side, dark hair — a style of the sort that was once associated with elementary-school girls. Her makeup was a no-makeup look and her mannerisms and speech were, I thought, exactly the same as the male panelists.

It’s not that I didn’t listen to what she and others were saying. I did. They said the same 3 or 4 things about the shutdown over and over again. If I were reading, I’d have it thoroughly skimmed in 20 seconds. Locked into the TV show’s idea of time, I search for things to pay attention to, and I find myself plunging into the visual dimension, which you might consider shallow, but I find deeper than who voters will blame and whether Schumer can negotiate with Jello.

I got very chatty about how Newswomen of the Future will dress and act, and then I had to turn the flashy pictures off and get back to my iPad. The low-battery alert was taunting me, so I set that aside, laced up my hiking boots, got my umbrella, and went out for a late-January walk. I had my earbuds in so I could listen to the latest edition of the New Yorker. The story was “When Barbie Went to War with Bratz/How a legal battle over intellectual property exposed a cultural battle over sex, gender roles, and the workplace” by Jill Lepore. I made a mental note to show you this:

It’s no accident that #MeToo started in the entertainment and television-news businesses, where women are required to look as much like Barbie and Bratz dolls as possible, with the help of personal trainers, makeup artists, hair stylists, personal shoppers, and surgeons. Unfortunately, an extrajudicial crusade of public shaming of men accused of “sexual misconduct” is no solution, and a poor kind of justice, not least because it brooks no dissent, as if all that women are allowed to say about #MeToo is “Me, too!” The pull string wriggles.